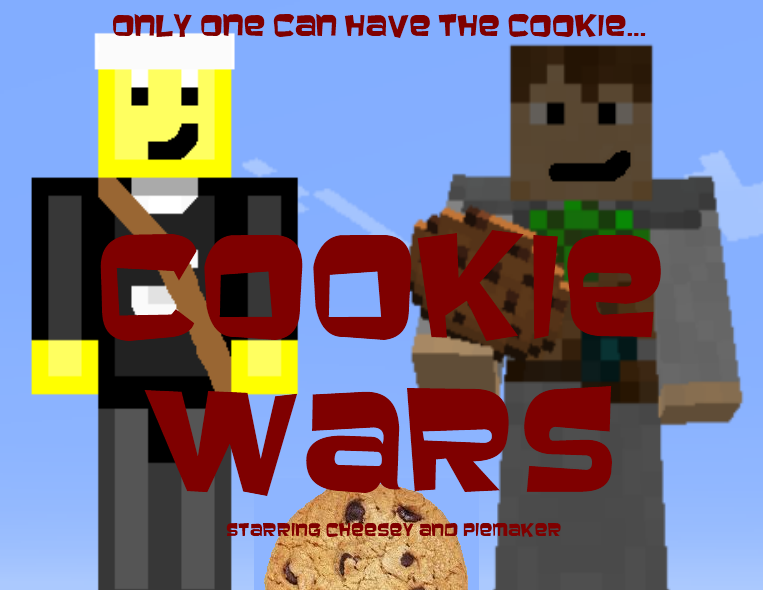 ---There it was - the cocoa bean - sitting in that chest in the zombie dungeon. I took it under my wing, and with it, created The One Cookie. I held it up in triumph. Then there was blackness. Later, I woke to find that I had been run through with a sword - the sword of PieMaker. That cookie was MINE.---

In an ongoing battle against ourselves, the forces of nature, and creepers, only ONE can have the cookie. Who will triumph, and recieve the chocolate chip mouthwatering goodness? It's all coming very soon!

We're not doing any vids, so I'll explain what's happened so far. I will try to do one tomorrow!

Yesterday, Pie and I went to the survival games map two to battle for the One Cookie. After nearly falling off buildings, being blown to bits by creepers, and teleporting to impossible reaches with Ender Pearls, Pie became victor after a long battle ended by a creeper killing me in a tree. Pie then came intothe possession of The One COOKIE!

Today, we took our mad skillzzzzz to the Survival Games 3. We had Macho hide the cookie somewhere on the map, and Pie and I agreed that once one of us found it, we could start the PVP. Until then, we could gear up for war. After at least seven hints from Macho, Pie found it.

We took off in opposite directions, and decided to meet at spawn. I snuck up on him, but fell off the ledge where I was standing, and was nearly killed by the eagerly awaiting mobs, with Pie sniping at me.

I Enderpearled back up and knock him off while he was fleeing from the giant Macho had spawned.

I jumped off to at that point, also.

Then we drank our speed potions and chased each other around at the spawn point. We were both very weak. Creepers were exploding, spiders leaping, skeletons sniping. I eventually killed Pie with only two and a half hearts left. Then I was killed a few seconds later by mobs.

It's a tie thus far in the greatest cookie war of all time. Only one will emerge victorious and be able to devour the chocolatey chip goodness. Who do you think will win? It will all be revealed tomorrow.... Cast your vote!
_________________
-Cabey9